Proposal photoshoot in Tuscany, with a double surprise! 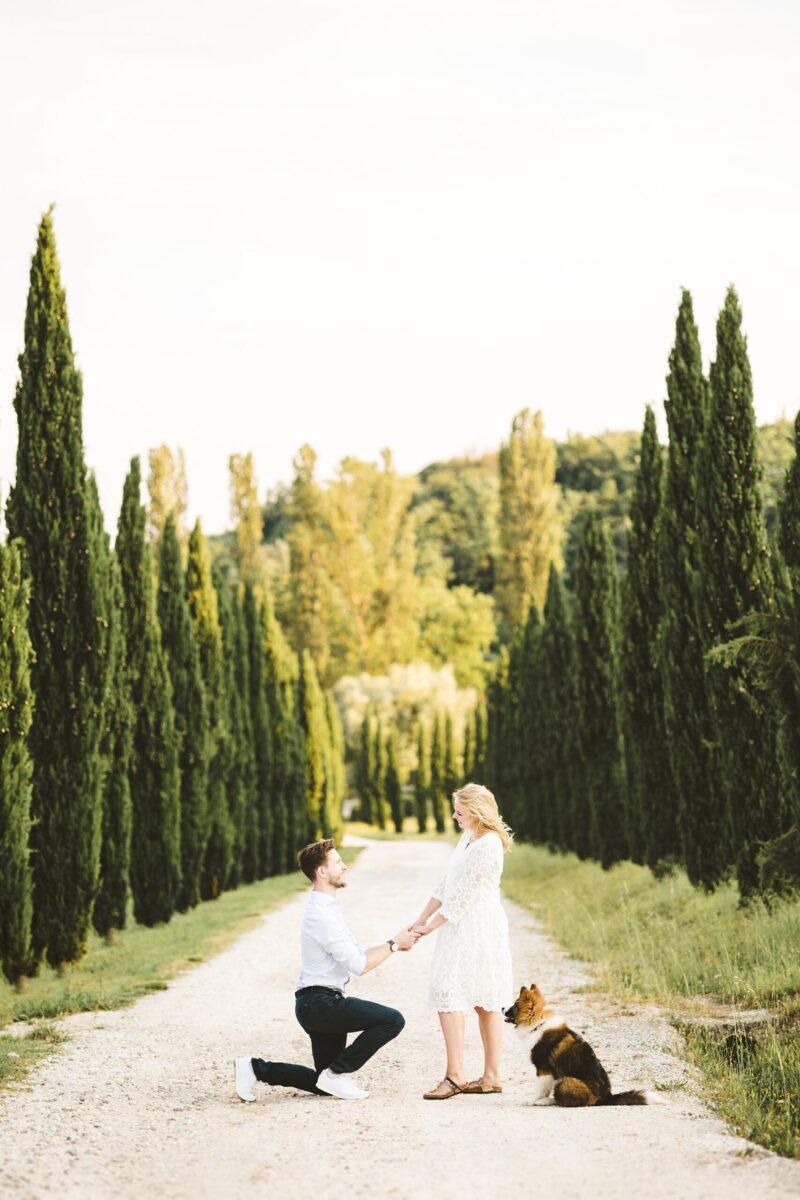 This is the story of a man who wanted to surprise his fiancée, and ended up being surprised himself! And of a photographer who had to face an unexpected challenge that had a perfect outcome.

This is the story of Tina and David’s proposal photoshoot at Villa Poggio Tre Lune, in Tuscany, and the multiple twists of their sweet adventure!

“My partner and I love Italy and I thought I would be one day proposing to her there. Then corona happened. Still wanting to go through with the engagement I asked her in our flat in Berlin before Christmas (she said yes!). Now, I would love to give her the proposal she and I dreamt about. I want to do a second surprise proposal in Tuscany. And I would very much like to capture that special moment together with you.”

This is the message I received from David, with whom I started organizing a romantic proposal photoshoot. These shootings require a lot of planning, because everything has to run smoothly without the surprised person to notice anything strange. I picked the perfect location, set up the day and time, and instructed him about the path he had to follow… and then David found out that his fiancée Tina had set up a surprise too, on that same day!

What did that mean? It meant that we had to re-plan the proposal photoshoot last minute. And also that the shootings ended up being two because Tina contacted me too, asking me to take photos of her surprise – a dinner on the terrace of Poggio Tre Lune and the delivery of a special gift to David.

I wasn’t just a photographer for proposal anymore: I felt like a Love Cupid with planning skills. I was texting to both of them separately, in order to plan everything without spoiling the mutual surprises… and it worked!

What I knew was that we couldn’t leave Poggio Tre Lune for the proposal photoshoot, because Tina’s surprise was going to happen there. What I didn’t know (yet) was that the location offered a lot of beautiful spots and was ideal as a background for charming and diversified photos! I went there before their dinner, so that I had time to choose the ideal place for the proposal photoshoot and update David.

Then the first surprise was on – and I was on it, hidden between the bushes. After that, we went for a walk around the property for some more couple shots – together with Samy, a wonderful furry friend. Little did Tina know that she was about to be surprised too!

As soon as we got to the cypress avenue – the spot we chose for the proposal photoshoot – David kneeled and popped the big question. She said yes, again! But this time every emotion was captured in timeless photos, immersed in the incredible atmosphere of the Tuscan countryside. Just as they dreamed.

If you’re also looking for a photographer for your proposal in Tuscany, get in touch with me. It will be my pleasure to help you plan your surprise and turn it into a never-ending memory!